With Egg, from Bangkok 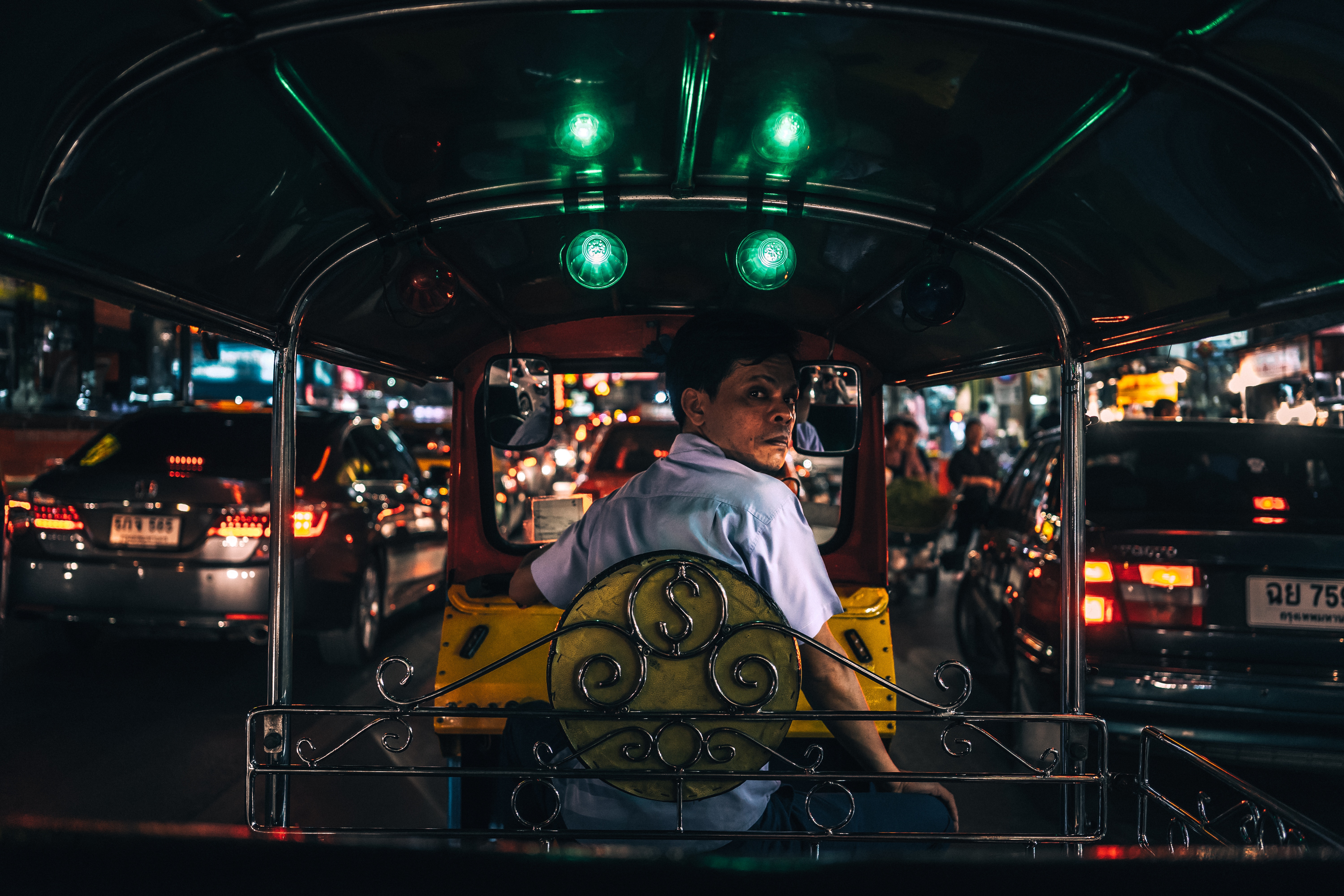 01 Sep With Egg, from Bangkok

Posted at 18:31h in short fiction by Will Hearn 0 Comments
0 Likes

It’s not that I love walking so much. That apartment is just so damn small. It’s a single room with two twin beds, a bathroom with a toilet that folds my knees up around my ears, and a shower barely big enough to stand in. No hot water either.

So, I walk the three miles home from work every day, just to have some time to myself. I spend a lot of my weekends walking too. I go see the temples, just my sandals, camera, and me. The tuk-tuks go far too fast, I’ve even seen one wreck in an intersection, probably because the traffic laws are more suggestions than rules. The driver was catapulted from his motorbike, his limbs stiff like a lego man. I stayed off them after that.

I walk and walk and walk, taking pictures. There’s a lot to see in this city, that’s what my boss told me before I came two months ago. I guess he’s right. In one temple I touch a golden Buddha’s jade studded foot, and when the guard pointed at the sign “ไม่แตะต้อง”, I took a picture of him. He seemed annoyed, but Thai people do not express much besides happiness, and only his occupation allows him to remain stern in the face. It’s a good photograph.

The city buzzes, roars, and crackles. The sidewalks are in good enough condition and sometimes I find stretches where I see no one for five minutes. I’m very aware of being a white man at that moment, but am glad I dress simply and am tall with wide shoulders. My body looks braver than I feel. Beneath a bridge, there is are huge Thai symbols spraypainted, bold and soft figures, and there are bat droppings running through the paints, making them look tearful. Just beyond, a schoolyard is empty.

Seven-elevens everywhere! But they’re amazing, some of them with fresher foods than you can find in a grocery store back home. All of them carry beer, too. I buy a big bottle of beer, Chang tonight instead of my usual Singha. They’re both good with spicy foods, though all the Futbol players I sometimes stop and sit with drink Singha. I carry the Chang out without a bag.

They’re sitting close to the sidewalk, just outside the small restaurant with the green and pink neon sign above it “วิมาน”. I don’t know or care what this means. I stand near enough to the Futbol fans to be able to see the game. I open my beer and take a drink. My feet hurt.

“Swasdi krab,” a young man says to me. The thing I love most about Thai people is their willingness to be friendly to anyone ever. This coming from a Southerner. “Swasdi,” I say, smiling. A middle-aged man next to him turns, also smiling but less enthusiastically, or perhaps, more tired. He is missing his two front teeth and gestures for me to sit.

We touch bottles. “You are English?” The young man says in a very thick Thai accent.

“Oooo,” he says, and even his middle-aged friend seems impressed, his lips pooching out.

“I have very nice daughter,” the young man says. “You meet?”

He cocks his head to the side like a labrador, his smile unfazed. “Okay, you meet!”

“No, no,” I say, waving my hands but laughing. I look around and grab my beer. “Chiyo!”

“Chiyo!” The young man says. His friend raised his bottle too. He hasn’t looked away from the television that has been rolled out onto the patio on a small desk. The screen is about the size of a sheet of notebook paper.

“Man U,” the middle-aged man says, shaking his head. That’s when I first realize both men have on red jerseys for Manchester United, instead of the black for Thailand’s home team. I wonder if they wear the red shirts besides when watching soccer, thinking of the burning city municipal building back in May. Could a soccer jersey double as a protesting uniform?

“Not Thailand?” I ask. The man laughs and I can see his wet tongue trembling through his missing teeth. “Xu.” They’d had a shit year, indeed.

The young man is handing me something. It’s an old cell phone, one as clunky and brick-like as my first when I was fifteen. I’m wary but unable to refuse the smiling man’s offering. “Khrab?” I say. He gestures that I hold it to my ear. I do, smiling dumbly.

“Swasdi Kha,” I say to the woman’s voice.

What follows is a very broken and embarrassing conversation. The woman is the young man’s daughter, who after all is my age. The man wants to set us up, obviously. I try to tell her I’ve only just sat down with them and shared a beer. “Khaa-ahh.” She says in the Thai way of softly drawling. It’s so sweet and warm it makes me want to ask her to meet me for dinner. It’s the most attractive sound of the human palate, the extension of Thailand’s courteous “Kha.”

“Beer makes them friendly,” she says. I laugh. “Friendly is good,” I say. Then, forgetting all my inclinations, I notice the young man is staring at me, smiling hugely, his brown eyes dancing in the neon sign’s strange light. “Nice to meet you,” I say and give the phone back to the young man. He must’ve been imaging all sorts of glorious things that might come from an American son-in-law. I wanted to tell him he was better off sticking to someone from Manchester, or even Thailand.

“Forty-shoo,” he says to me after talking with his daughter, repeating “Kha” many times, and with one final, “Khaa-aah,” to end the call.

He holds up four fingers on one hand and two on the other. “Oh,” I say, “forty-two.”

“Forty-shoo,” he says, pleased. Then he points to his own chest.

“No!” I say, and he smiles even bigger. The young man looks my age, and I’m ten years younger than him.

Then he points to the man next to him. “Six-six.”

There’s a moment of pause, him probably unsure of my less than enthusiastic reaction. I take a drink of beer, sigh, and say, “No! Sixty-six!”

“Khrab, khrab, krhab!” He says, shuddering in his chair.

“Go-ooh!” The sixty-six-year-old says, leaping to his feet. The men slap hands and hug then turn to me and we slap hands. “Alright,” I say. “Goal!” The grandfather and his son settle back into their seats. We touch bottles.

The son asks me my age, and I lie, holding up two fingers on one hand and one on the other. He smiles big and gives me a thumbs up, never doubting me for a second.

It’s the food that makes the city feel connected. Every table has the same little glass jars filled with sliced Thai chili peppers and vinegar with the little egg spoons with the spiraling shanks. Every dish can easily be topped with a fried egg. All the fried eggs in the city come with brown wisps flaring out from beneath the undersides of the whites.

I stop at the open-air restaurant close to my apartment. A woman and her husband are still cleaning up. “Pad ga pow,” I say. The woman, who is very thick and motherly for a Thai person, smiles tiredly. “Kah khi,” I say. With egg. She nods and tells her husband, the cook, who looks like an average Thai man, skinny, dark, and knotty, like he may secretly be very strong. I sit quietly at the table stirring the peppers, watching people walk by from beneath the tented, dark space.

When the food comes I eat it quickly, spooning peppers on every few bites, making my mouth burn and my scalp sweat. I finish and pay, 35 baht, but I leave 40 because I know it’s late. “Khxbkhuṇ,” the woman says, her tiredness deepening. I wonder how old she might be.

In the alley leading to my apartment, I see a cat. It’s sniffing at a piece of fruit that wasn’t there that morning. Unripe mango. “Swasdi Kha, kitty.” It walks between my legs and headbutts my calf. Its tail curls around my leg and trembles. I reach down and scoop the cat up.

Her eyes are narrowed lazily, but her tail begins to flick. I walk inside and up three flights of stairs to my hallway. The fluorescent lights flicker. I can’t see my door at the end of the hall, the overhead light has gone out long before tonight. But I unlock it without needing to see and step inside.

The room is dark. I didn’t draw the shades when I left this morning. The city is a smattering of blipping lights, blue, white, orange, red. Though it’s well after nine, there’s still a hazy light on the horizon, as though the sun refuses to fully set on the city. A flash in the sky, jagged, bright-orange fissures cutting across the dark clouds. Everything is a shade of purple for a moment.

The cat mews in my arms.

I sit on the bed looking out the window. There’s a layer of sweat across my body and I know I won’t be able to sleep without a shower. I think of having to stoop to get beneath the piss-thin stream of cold water and wish I had another beer.

The cat meows louder and tries to kick at my arms. I feel her front claws extend into my wrist.